April 05, 2010
Have you ever heard a joke about developers? Actually it's not a joke since I personally think it's true (at least to me) but it's always fun to hear: Developers are very lazy. (Oh yeah, I'm). They can't afford to finish a 15-minute job at all. (Oops). They will spend 3 hours coding to be able to finish that job in 1 minute. (Uh oh, that's 14-minute laziness. LOL)

I have an example here: got an exercise in discrete mathematics which involve using the Dijkstra algorithm to find the shortest way between a vertex to another in a graph. There are enough vertex in the graph that made me lazy (5, LMAO). Oops, I have just opened up the source code and found out it's about Hamiltonian path, anyway, I was lazy and finally came up with this PHP script to solve the problem quickly (hundreds millisecond is considered quick, isn't it?)

The script is intelligent enough to sort out all duplicated paths. Lazy meeee! 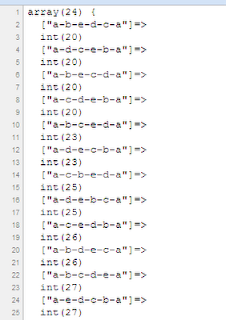