March 16, 2020
For new cluster, I usually deploy a simple phpinfo app to test that the happy-path works as expected. The PHP service and deployment is pretty simple:


The Docker image is basically a php:apache image with a single index.php file.

Next, setup the ingress and issuer (I'm using ingress-nginx and cert-manager FYI): 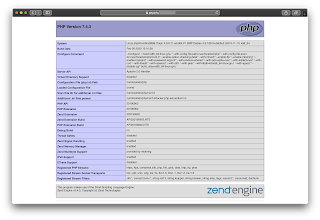 April 22, 2010
This is sick! Just a few days ago, I ran into OAuth as I want to get my GMail feed based on Google Data API . I succeeded. With a little help of an OAuth open source ( here , available in several programming languages). Then I remember that I once heard that Twitter also uses OAuth as an authentication option so I turned into Twitter and had a good read. Finally, I found out that they are basically the same (hehe, it's obvious since OAuth 1.0 is a worldwide standard). I had an idea of writing a universal class which can handle both Google and Twitter OAuth functionalities. It's not too hard. I took most of the idea from the PHP example ( here , PHP only). I also made a small script which accepts URI to send and intercept response from Google & Twitter servers. At that moment, I was so excited with all the ideas but actually it has no real world benefit so I just left it there... Until today, in the F8 (says "fate") conference of Facebook, I was stunned fin
9 comments
Read more

What the Hell Is Going on in Vietnam?

May 28, 2010
I have just read this: What the Hell Is Going on in Indonesia via TechCrunch. The author (Sarah Lacy, one of my favourite) took her chance in Indonesia to find out why there is such a great growth in Internet usage in that South East Asia country. It was a good read. There are some interesting parts like I grilled them on some basic questions to bring you a Web-in-Indonesia primer. But before we get to those, here’s what impressed me the most about this small-but-tightly-knit community: It’s incredibly collegial. Plenty of research has shown that the biggest reason Silicon Valley beat Boston as a venture capital and startup hot spot was because culturally it was open, trading employees, funding, mentorship and ideas among competitors. It’s not uncommon to see Web competitors in the Valley having dinner together and generally discussing business challenges, before they go back to the office for some late night coding to bury one another in the market . I laughed so hard reading thi
5 comments
Read more